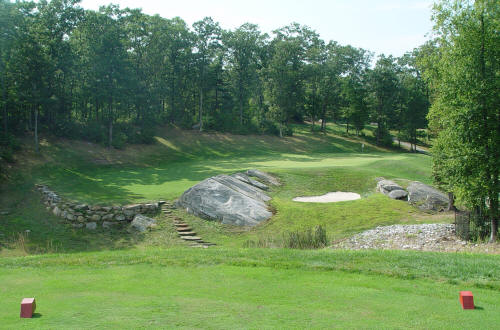 The Scadden Silver Mine

Familiar as most our young people think they are with places of present and past interest within the town limits, there is one spot about five miles from the Center which possesses quite a bit of history and which was of far more than local interest a half century ago, of which the present generation know little if anything.  This is the old silver mine in Scadden, about a half mile south of Comfort R. Thompson's.

It was the privilege of the writer to first visit this old historic spot about nineteen years ago in company with the late Dr. Robbins.  Though the "works" had then long since fallen into disuse and decay the walk thither from the road was a very easy matter compared with what it is today through the dense tangle of swampy underbrush that so greatly impedes travel.  About the "works", things have not materially changed except that the trees have grown taller and vegetation more uninviting, about which swarm myriads of flies and bugs of every description known in old New England.  A search for the old mine the present week would probably have been a more tiresome if not an unsuccessful task had it not been for the pilotage of Mr. Thompson who stopped his plow in the field and volunteered his kindly aid with the same evident pleasure he subsequently showed the writer over his fine farm and model farm barn.

From what could be learned of this long since defunct enterprise, public notice was first drawn to it in this wise: About the year 1837 a large part of the real estate in that section was owned by the late Kyland Tucker.  During the progress of a very heavy thunder shower Mr. Tucker was aroused by a report of thunder of unusual severity, and the seeming proximity of its striking the earth started him out a little later to investigate.  He traversed field and pasture for a time without finding any trace of a thunderbolt until he thought he detected smoke arising from the ground.  A close investigation revealed neither a rent in the rock whence came the smoke nor a sulphurous odor which he expected to find.  While examining the broken fragments of loose rock he detected something bright.  Out of curiosity he chipped off the piece and was then more surprised to find other specimens.  These he easily procured and carried home, after which he gave them scarcely a thought until some time afterward when a visitor with mineralogical knowledge was attracted by them.  His surprise was great on learning that the "specimens" had been mined "right here on Scadden hills" and eagerly accompanied Mr. Tucker out into the pasture on a tour of inspection.  There, sure enough, were plenty of good specimens easily obtainable and Mr. Tucker was advised to "keep the thing still" and send samples to New York to be assayed.  He sent the samples, but the visions of vast wealth which drove sleep away from his eyes at night would not permit him to "keep the thing still".  People at first were amused at his gullibility, but after a visit to the "mine" began to modify their incredulity as the report came back from the assayer that there was "money in it".  Mr. Tucker was now almost wild with excitement, and how he avoided brain fever was a mystery.  Too late was his regret that he had not kept the thing still, as great numbers came pouring into his domain from all directions, managing to purloin a bit of rock for a souvenir which did not fail to catch his eye, each bit seeming to impoverish him.

Among his early visitors were two or three capitalists from New York who had been attracted by paragraphs that had found their way into the newspapers.  This was before the days of "mine planting" and an examination of the ore and the assayer's report convinced them that there was money  to be made so they approached the owner with a very modest offer for a tract of land, but stood aghast at the fabulous price he asked.  Failing to do anything in the way of a purchase they leased the ground and made other agreements on the share plan with him.  They returned to New York and purchased and shipped expensive machinery of the most improved pattern known in those days.  A practical miner, Wm. H. Hughes, was found and hired, together with a lot of help, divided into night and day gangs, and work was begun close by where the first specimens were obtained.  A shaft was sunk to a considerable depth and a vein found about the size of one's finger.  Out of this were obtained "chunks of solid silver as big as a man could lift", was the report of Mr. Tucker in a neighboring village, and at another time the ore was panning out "40 per cent of gold and 60 per cent of silver," according to the same authority.  Considerable latitude was given these reports when the true condition of things at the mine became known, for, contrary to expectations the most indifferent success was being met with.  The first shaft was soon abandoned and a new one struck about fifty feet distant.  This promised better results and work commenced with renewed zeal.  About twenty feet down another vein was found, but not being thought sufficiently productive was sunk lower until a depth of sixty feet was reached.  Meanwhile the water had kept pouring in in such quantities that a pump had been rigged and was constantly worked.  The work proceeded slowly with blasting, and the broken fragments were drawn to the surface in great buckets by horse power.  One man lost his life here through carelessness, going down the shaft a few minutes after a light blast when all thought another must soon follow.  It did about the time he reached bottom, and his lifeless remains were subsequently brought to the surface in terrible shape.  At the bottom of the sixty foot shaft several cross chambers were started and one followed up a distance of eighty feet wide and high enough for a man to stand upright and work to advantage.  Visitors were occasionally permitted to go down with the help, but badly as some lady visitors wanted to go down none mustered up sufficient courage to do so.  The small pieces of crushed rock and ore were sorted out and a few loads sent to the city.  The following season the work was resumed but shortly was abandoned, the yield of silver not being sufficient to pay expenses.

Five or six years later another attempt was made to work with the mine, but after sinking what available capital the company had they gave up the job in disgust.  Mr. Tucker , the owner, was long since gathered unto his fathers no richer than before the great silver craze struck him.  There are several however, who still have a very distinct recollection of the great undertaking and never tire of recalling incidents connected with it.  Upwards of seventy men were employed there first and last, many of whom boarded at Caleb T. Richardson's whose hospitable table has lost none of its hospitality since.  Few if any visitors inquire out the old mine today as there is little to attract one.  On one side a space less grown up to forest where once the horses kept up their tiresome travel hauling up the stone filled bucket, beyond a hole filled with water, the banks and wood curbing caved in so that it is scarce eight feet square, beyond it another hole and between them a mound of broken brier covered rocks, all there is to show for an expenditure of thousands of dollars in a fruitless undertaking.  Whatever became of the ore shipped to the city no one knows, but all seem to agree that for every dollar mined there from fifty to one hundred dollars was the cost of doing it.